In 1492, not only did Columbus sail the ocean blue, but on this date eight months earlier the Catholic monarchs of Spain (primarily the joint tenants of Castile and Aragon) gained a conquest that was far more significant to contemporaries: a final victory of Christendom over the Moors of Al-Andalus, or Muslim Iberia.

This was the culmination of a 500-year long conflict. The war between Iberian Christianity and Islam had begun with the advance of Muhammadan warriors who emerged out of the Arabian peninsula and swept across North Africa in the 7C. The Muslim Berbers extended these conquests further eastward, general Tariq ibn Ziyad invading Spain in 711 on behalf of his Ummayad Caliph. Tariq’s forces quickly defeated the Visigothic king Roderic (Rodrigo), and his victory would earn him a long-lasting tribute – one of the Pillars of Hercules, the city of Mons Calpe, was renamed Gibraltar in his honor, from the Arabic for “mount of Tariq.” Successive waves of Muslim forces would occupy the rest of the peninsula, and even push their way into southern France by the first third of the 8C.

For the next five centuries, Christian conquistadors would slowly reconquer this territory, bit by bit. Periods of major conflict alternated with periods of coexistence and even collaboration, as exemplified in the varied career of Spain’s famous gran capitán El Cid. Despite peaceful interludes, the Reconquista continued inexorably, assisted mightily by the collapse of Muslim unity, as Moorish politics fragmented Al-Andalus into a series of weaker taifa kingdoms. Distant Caliphs turned their attention elsewhere, and after these sprawling Caliphates collapsed, successor states in North Africa, such as the Almoravids and Almohads, turned their weapons on the Moorish rump kingdoms, replacing one ruling Muslim dynasty with another. By 1300 Muslim disunity had allowed Christian crusaders to recapture much of the peninsula, although Iberian Christians also had a tendency to collapse into civil war. Christian unity was hindered as well by the divisions between Portugal and Castile, peninsular competition which led to internecine struggles between these Catholic powers, aided by foreign intervention from the north. Over the centuries, however, the Muslim-Christian conflict dominated the peninsula, such that the omnipresent Muslim foe to the south gave Iberian Catholicism a distinct crusading flavor, a mindset buttressed by the local Military Orders of Calatrava and Alcántara. Constant raiding and frequent campaigns of conquest became so ingrained that Iberian Christian identity expressed this perpetual way of border war with a particular manifestation of their patron saint, St. James the Moor-Killer. 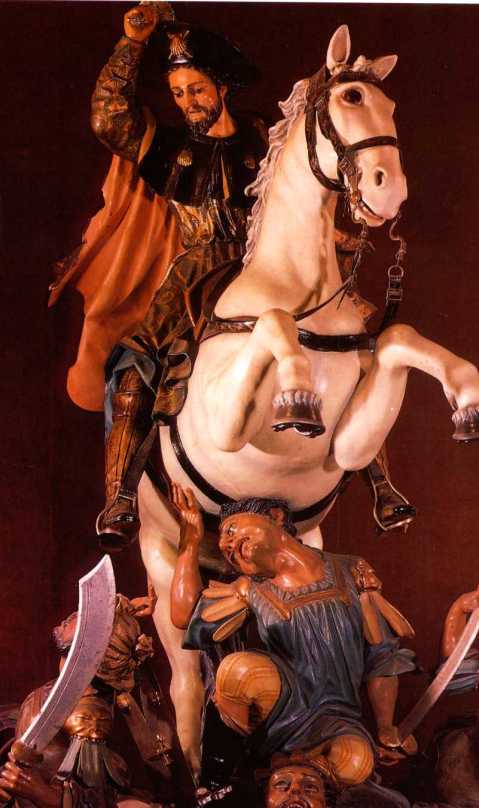 When a new war broke out in December 1481, the Emirate of Granada controlled only a slice of territory on the southern tip of the peninsula. The recent peace with their Spanish foe had barely lasted three years, in part because the politics of the Iberian peninsula had been upended a year later when the Aragonese crown passed to Ferdinand II (Fernando). His marriage a decade earlier to Queen Isabel of Castile now resulted in a union of the kingdoms of Aragon and Castile (ruled by Isabel since 1474). With Fernando eager for martial glory and his wife eager to extend Catholicism’s sway, with their domains full of restive nobles, and with the Papacy offering funds for a Crusade to erase the memory of the loss of Constantinople, a more united Spain saw its weakened southern neighbor as an enticing target. Not only had successional instability continued to plague the Nasrid state, but its naval support had eroded over the previous seventy years. Portuguese amphibious operations had captured numerous ports along the Moroccan coast, hampering Berber support for its northern Muslim neighbor. Nor could the rising Ottoman Empire provide assistance for this jihad, as its efforts were still focused further to the east. The Muslim thorn of Nasrid Granada was only waiting to be removed.

The famed dual Catholic Monarchs took the opportunity to unite their own fractious nobles in one last Iberian Crusade. A surprise Granadan attack on the town of Zahara inaugurated the final conflict between the two sides. The Spanish responded, and took advantage of the struggle among candidates for the succession of the Nasrid throne: this civil conflict alternated first between the father Abdul Hassan and his more pacific son Muhammad XII (known as “Boabdil”), and, after Abdul Hassan was incapacitated by a stroke, between Boabdil and his uncle Muhammad XIII (“El Zagal”). Going on the offensive in 1482, Spanish gunpowder artillery facilitated the capture of a dozen rocky castles and fortified towns; within five years Catholic forces had captured most of the remaining Granadan territory to the north and south of the capital city. At the same time, control of the capital city itself had shifted multiple times, with the Spanish first playing Boabdil off against his father, then siding with El Zagal against his nephew. Boabdil managed to outmaneuver his uncle with both direct and indirect Spanish assistance: he took advantage of Christian support in wresting control of Granada from his uncle, then looked on as the Spanish occupied El Zagal’s remaining territories, forcing him to flee to North Africa. He had defeated his internal enemies, but Boabdil’s brief counter-offensive in 1490 failed to expand his reach beyond the confines of his fortified capital city. He could only wait as Catholic forces tightened their noose around the capital.

The “siege” of Granada was, unlike earlier attacks, more a blockade than a proper siege. Spanish forces invested the capital city in late April, fought numerous skirmishes and individual duels throughout July, and finally settled down to wait out the garrison by constructing field works around the fortress. Soon after this new Santa Fé construction was completed, Boabdil secretly began negotiations. The Treaty of Granada was signed in late November; the city itself was handed over to the Catholic forces a little over a month later, on this day in 1492. The famed Alhambra, a palatial fortress complex, was also relinquished without resistance. As for the Granadans themselves, according to the terms of the treaty those Moors who chose to stay in Granada were promised toleration. Heavy-handed efforts at Catholicization, however, led to revolt within a few years, and this in turn led to suppression and the forced conversion of the Moriscos in Castile in particular. Their fate had already been predicted by Catholic treatment of Iberia’s Jews, who had themselves been forced to convert (becoming conversos) under the purges of the Spanish Inquisition. Philip II’s later crackdown throughout Spain led to yet another Morisco uprising in 1568. In the wake of its suppression, concerted efforts were finally made to evict the remaining crypto-Muslims, numbering several hundred thousand, from Spain between 1609-1614. Thus ended the official Moorish presence in Spain.

For those interested in a more detailed treatment of the events of the war, the overview in Nicolle can be supplemented by the more detailed study of Prescott/McJoynt. For reference, I created the following timechart (with Adobe Illustrator) to help trace the twists and turns. See the Symbol Key page for the key to the icons. 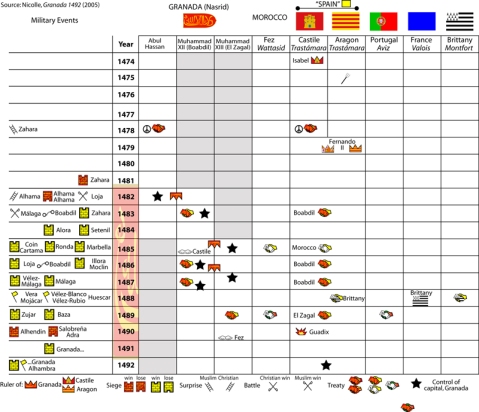 As the above timechart indicates, this was a war of shifting alliances, and one waged primarily in raids and devastation, punctuated by the siege and capture of fortresses. Major set piece field battles were rare, outnumbered by surprise ambushes and skirmishes between parties. McJoynt highlights the hybrid form of warfare that emerged from this war: a combination of heavy men-at-arms dismounting to fight along their infantry troops, the use early handguns and the effective use of gunpowder artillery; the use of light troops for scouting, raiding and harassment; and the operations combining land and naval forces. He argues that this war provided a training ground for Spanish troops that they would later put to good use in the Italian wars against their French foes. Thoughts?

Since the Reconquista occurred over centuries, it makes it difficult to find a good map to illustrate the back-and-forth of the conflict, particularly the punctuated nature of the advance of Christian forces. The Cambridge Illustrated Atlas of Warfare has a few good maps, and Nicolle’s Osprey book has several more detailed operational maps for the final war. But despite the poor quality and Teutonic tongue, I still like this one best, largely due to the broad overview provided by its use of small multiples: 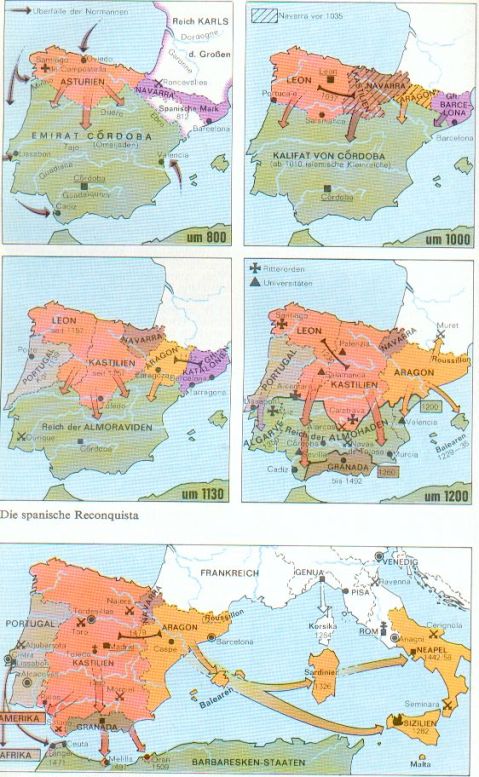 The commemoration of this event also allows me to share one of my favorite EMEMH charts, one that does an excellent job of illustrating the pace of Reconquest and the relationship between military victories and territorial/demographic conquest (my only quibble would be to iconically distinguish battle from siege): 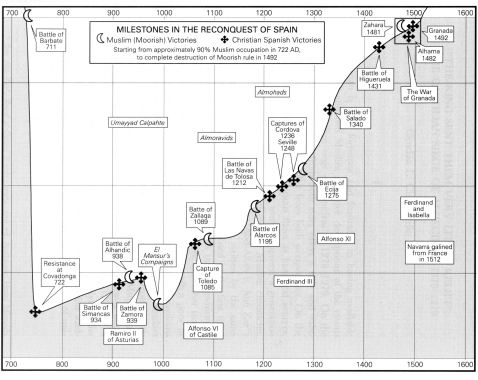 The final subjugation of the Moors has found renewed resonance today. First their cause enjoyed a wave of publicity in the 1990s after George Costanza sought to resurrect their cousins the Moops from historical anonymity. More seriously, declining European fertility rates and increasing Muslim immigration have exacerbated tensions in Spain, even leading to the caching of politically-incorrect Santiago Matamoros statues. These Iberian tensions increased with a 9/11-inspired war on radical Islamic terrorism. In the context of Huntington’s “Clash of Civilizations,” visions of a tolerant multicultural Al-Andalus (la Convivencia) struggling against a violent intolerant Catholicism have clashed with the Islamicist dreams of a resurrected Caliph ruling over an expanded dar al-Islam, calls for a Re-Reconquista if you will. The conflict along the old Ottoman-Christian Mediterranean border has exploded once again, making knowledge of the Reconquista relevant some five centuries later.