Thanks to the transcribing efforts of Andy Tumath, the world can now add a significant portion of Nathaniel Boteler’s War Practically Perform’d to its digitized corpus. For those who can’t wait until the break, here’s a summary, in word cloud format of course: 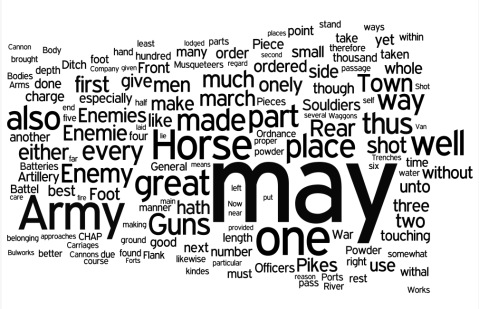 Voyant’s Cirrus word cloud does a better job with English stop words, even though you can’t really modify the format:

And in case you forgot Voyant:

One guess as to which part of Boteler’s work focuses on fortifications and siegecraft.

I’ll leave it to those with more spare time to pull out gems, but given recent discussion of cumbersome armor and my own interest in the cowardice attributed to those skulking behind protection, I thought this section on armor was germane (recall that this was published in 1663 and again in 1672):

We shall speak in the next place, and in this second Chapter, of the second Principal contained under the first Requireable, that is, of Arms; and first, of Defensive, and those fitted for the bodies of men; touching which, I shall not particularize in the pieces and names, well enough known to every Train-band-man; but only enquire into the use, and when they seem best fitted for service, and for the turn they are provided.

And first of those called Arms of proof. 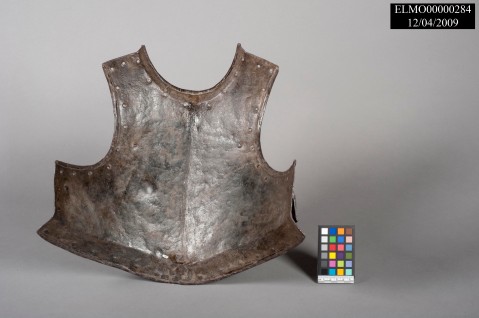 A proof indeed of the degeneration of mens spirits and courage, and wherewith [8] the wearers become so over-charged, and shackled, that they seem chiefly prepared to fight against the shock and brunt of their own coats of Steel; and as if bound rather to defend their Arms, then their Arms are.

In which regard (for mine own part) I find no reason why they should be in any great request. For should there be found one man of a thousand so well underlaid as to match or stand under one of them, yet shall he note be able to fight, no not to keep his legs against the force of a Musquet-shot within point-blank, or a level Range: for though perhaps it pierce not his thick armour, yet shall it sure enough lay the bearer on his back, there to lie until he find a Comrade or two to set him on his feet, or be troden to death with the prease of his own side. And truly there is but little difference, either in respect of assistance to his Partie, or safetie to himself, between a mans being killed by a Musquet-shot by the want of his boisterous Arms, and his being overthrown and tortured to death by having them upon him. ….

For those who refuse to believe that a word cloud is the window into an author’s soul, you can always Read More.

END_OF_DOCUMENT_TOKEN_TO_BE_REPLACED

If your idea of a Christmas present is watching a guy in 15C armor running on a treadmill, Merry Christmas. The study, published in the Proceedings of the Royal Society B (Biological Sciences), argues that steel plate armor doubled the energy expended by unencumbered soldiers. I seem to recall medievalists arguing that the finely-crafted balance of plate mail made it not much of an encumbrance at all, so I wonder if this is a revelation or not. Here’s the abstract from the journal article:

In Medieval Europe, soldiers wore steel plate armour for protection during warfare. Armour design reflected a trade-off between protection and mobility it offered the wearer. By the fifteenth century, a typical suit of field armour weighed between 30 and 50 kg and was distributed over the entire body. How much wearing armour affected Medieval soldiers’ locomotor energetics and biomechanics is unknown. We investigated the mechanics and the energetic cost of locomotion in armour, and determined the effects on physical performance. We found that the net cost of locomotion (Cmet) during armoured walking and running is much more energetically expensive than unloaded locomotion. Cmet for locomotion in armour was 2.1–2.3 times higher for walking, and 1.9 times higher for running when compared with Cmet for unloaded locomotion at the same speed. An important component of the increased energy use results from the extra force that must be generated to support the additional mass. However, the energetic cost of locomotion in armour was also much higher than equivalent trunk loading. This additional cost is mostly explained by the increased energy required to swing the limbs and impaired breathing. Our findings can predict age-associated decline in Medieval soldiers’ physical performance, and have potential implications in understanding the outcomes of past European military battles.

Of course this leaves all sorts of questions unanswered, assuming the scientists included all the relevant variables in their experiment. The British media has framed the question around the battle of Agincourt, no surprise, where the French men-at-arms famously dismounted and slogged their way across a ploughed field to get at the awaiting English. As an aside, the first exam in my first grad school foray into EMEMH (a Joe Guilmartin course) required me to put myself in the greaves of a French knight as I slogged across that soggy field. I don’t remember my grade, but I do remember ending it with dying thoughts of my petite chouchou back home, whom I would never see again. But I digress…

I wonder if the Agincourt framing is a bit misleading, since the English are generally said to be among the first to dismount their own knights, to shore up their archers. So I guess I’m left wondering how we incorporate this information into our understanding of late medieval battlefield tactics. Presumably it provided further encouragement for the preference for defensive dispositions in battle, as Cliff Rogers emphasizes. Any other thoughts?

People of Color in EMEMH art

NPR had an interesting article on a tumblr blog, People of Color in European Art History. The topic raises some interesting methodological questions about historians’ use of art. And it made me immediately think of this painting:

I’ve always wondered about this portrait. Not the center of the painting: the Great-Captain-holding-a-marshal’s-baton-wearing-a-fancy-silk-sash-on-a-Rearing-Mount is standard iconographical fare (see a collection here). I mean the black attendant in the left corner. Uninitiated in the arcana that is art history, I wonder why he was included. Did Marlborough actually have (a) black servant(s)? Did most generals? Most English gentry? Did early modern blacks campaign in northern Europe, as later colonial troops would? Did Marlborough pick up some African slaves/servants from his early service at Tangier? I recall that in Caribbean siege capitulations, black slaves were included as property that evacuating garrison troops were allowed to take with them.

Or maybe the artist added this individual to evoke some Spanish (e.g. Moorish) connection or connotation? Or was the African page intended to simply provide variety among Marlborough’s many portraits? Did this insert an element of the exotic into an otherwise monotonous genre of great captain portraiture?

I can’t recall seeing any other black figures in the (admittedly mostly north European) military art I’m familiar with, which makes me curious.

I find myself at the end of most semesters brainstorming on how I might ease my teaching burden. I teach about eight different upper-level courses on early modern Europe in rotation, on subjects, periods and places ranging from the Renaissance through Napoleon (in addition to Western Civ). Almost every course usually covers 100 years or more, as well as several different European countries. Heck, my Religion, War and Peace course even takes it back to the Old Testament. Since I only teach each course perhaps once every two or three years, I often only vaguely remember the details of many events. Memory really does benefit from repetition, it appears.

So as I reflect on the semester just ending, I wonder for the umpteenth time how I can make it easier to remember a myriad of historical details. I hate the fact that I’ll forget many of the details I covered this semester, and will have to relearn them when I teach the same course again in a couple of years – even rereading my notes requires a lot of time I’d prefer to save for other things. I want, in short, to efficiently prep for class by reviewing a visualization of my notes on the campaign or war or theater or commander or historical event under discussion, and then narrate off of it in class (and provide the visual to students for their own notes). Is that asking too much? END_OF_DOCUMENT_TOKEN_TO_BE_REPLACED

Bow before the master 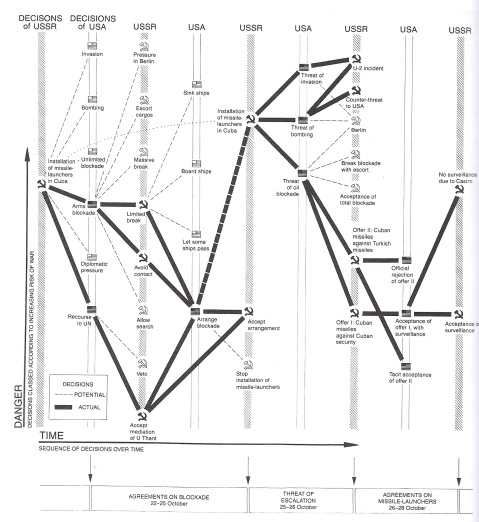 Why do I like this so much? I can’t really comment on the actual content, not being an expert in the Cuban Missile Crisis. But the design is gorgeous. The diagram does so many things well:

I also find the diagram interesting because it leads to as many questions as answers, making explicit what much textual discussion keeps implicit. The graphic encourages the reader to wonder how the author assigned the level of danger (y-value) of each choice, to wonder how each side sought to reconcile their multiple actions (e.g. how the Soviets both de-escalated and at the same time made broader threats), to consider the extent to which these decision were actually sequential and not concurrent, to wonder where exactly the y-axis reaches a 100% chance of war, and so on. Making such visualizations also forces us, as authors, to explicitly think about these same issues. That’s a good thing.

Why else do I like it? Because I was allured to the general format of multiple spectra awhile ago, though I didn’t implement it nearly as effectively, nor with as much data density, as Joxe:

How Literally Should One Interpret the Bible?

What’s even more impressive about the Cuban missile crisis diagram is that it was created in the 1960s, in a French journal for the mathematical study of political and strategic problems.

So seriously, what has happened to historical visualizations since the 1970s? Why have we regressed to such an extent that most history books barely include a base map of the geography under discussion? (And yet we can peer into the psyche of historical figures by looking at their portraits??) Are our visualization skills that rusty? Are our graphic software skills that rusty? Are Anglophone works that divorced from the French tradition of Braudel et al? At least some semi-recent French works are still trying: 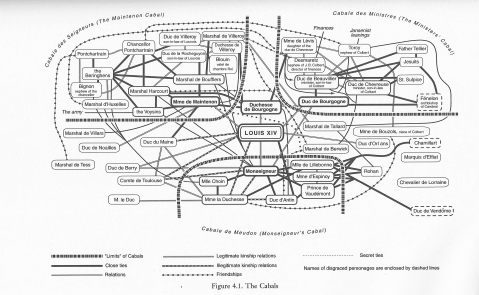