Just finished teaching my Elizabeth I section in Tudor/Stuart England. As usual, it’s hard for students to keep straight all the pertinent historical details when reconstructing a narrative – most of the places, people and events are new to them. The same is true for me as well, since almost every course I teach covers at least two centuries (and usually more than one country), which means I teach hundreds of narrative arcs from one year to the next, and frequently have to jump from England to France to Spain to Germany to Italy and beyond. Last time I taught Tudor/Stuart was 6 years ago, with a lot of other periods, topics and countries in between, so it’s been awhile since I delved into the Tudor details.

Preparing for these lectures, then, I rediscovered that historical narrative is, for me at least, one of the hardest ‘types’ of historical knowledge to remember. You can create broad narratives of various thematic topics by, for example, remembering that the ratio of pike to shot gradually declined over the course of the 17C and then rapidly disappeared by the time of the War of the Spanish Succession. There are very few moving parts, if you will, in such stories. And such thematic developments are also relatively simple to explain: maybe it’s about the gradual increase in the rate of fire and the improved accuracy of the weapons, etc. Of course there are far more complications if you start to explore the details, as Bert Hall’s Weapons and Warfare in Renaissance Europe suggests, or if you start comparing specific countries and theaters, or consider the possibility that the “progress” from pike to musket isn’t necessarily linear or inherently moving from less effective to more. But most people, even historians, tend to remain at the much more generalized level. And there usually isn’t that much variation from year to year, or, if there is, we tend to focus and expect linear progression that smooths out the variations over several centuries. In other words, we’re generally interested in the trend line rather than the specific events in the dot plot. Individual cases will be chosen because they are deemed representative of the larger trend.

But then we’ve got political and diplomatic and military narratives, which are a bit more complicated because they almost always focus on the specific events themselves, rather than the trend line – a lot more data, and a lot more connections between the points. We can certainly generalize from these narratives to create a thematic argument, e.g. one could argue that Elizabeth’s wars were driven (from the English perspective) by a combination of religious conflict, unstable and potentially hostile neighbors, and economics: Catholic internal and foreign plots + English desire to support the Protestant International + instability and foreign influence in Scotland and Ireland + inviting Spanish overseas trade…. That’s relatively simple, and most early modernists are familiar with such an argument, and it’s an important question to discuss. But we really need to have a handle on the narrative of what actually happened as well. It’s quite another matter to remember the order in which specific events occurred, particularly when there are dozens and dozens of events, each of which was precipitated by other events, and which in turn might precipitate other events.

Admittedly, we could keep it really simple: England fought two wars in the 1550s and 1560s against France but lost their last continental foothold of Calais nonetheless; they also had the occasional intervention against faction-riven Scotland, and from the 1560s on sent support to the French Huguenots and Dutch rebels, becoming directly involved in the war against Catholic Spain (fought in the Netherlands and at sea) from 1585 to the end of Elizabeth’s reign, along with more serious intervention in Ireland during the Tyrone rebellion (the original “Nine Years War”). This might be enough for a very general understanding of the period, though it’s a purely descriptive summary of English military involvement.

Yet as most of us who teach know, most historical textbooks (at all levels) tend to focus on what I’ll call event narratives (suggestions for a typology?). Especially if you’re focusing on English history, or use English-authored works. And that’s where it gets complicated. One option is to focus on particular key individuals. Take one example: the role of Mary Queen of Scots in English foreign policy. So you need to know who she was in the context of Anglo-Scottish-French relations: infant daughter of Scottish King James V (who died, possibly of despair, right after the English crushed his forces at the battle of Solway Moss); an infant princess whom Henry VIII tried to coerce into marriage with his son Edward, aka the Rough Wooing, before she was married off to the French prince Francis, thanks to the connections established by the ‘Auld Alliance’ between France and Scotland; a young Scottish-French princess then Queen consort raised at the French Court under the influence of the ultra-Catholic Guises, widowed in 1560 and returned to Scotland, where “her” kingdom had been ruled by her French mother Mary of Guise, but which was now being Calvinized thanks to John Knox et al (Calvinist missionaries who’d learned their theology in Geneva, and would eventually found the Presbyterian church in Scotland); a queen of Scotland who within 6 years would be forced to abdicate to her infant son James VI (raised by Protestant regents) and flee to England, which made things difficult for her cousin Queen Elizabeth, because various Catholics (English and otherwise) hatched plots to eliminate Elizabeth and thus put the next in line, one Mary Queen of Scots, on the English throne, and hopefully reCatholicize England as a result, an outcome Anglicans had feared ever since their last Queen (Mary) married Philip II of Spain and burned a couple hundred Protestants at the stake. Several plots later (one of which saw the defeated rebels flee to Scotland for refuge, which precipitated another English intervention), Elizabeth finally conceded that Mary’s continued existence served as an inevitable center for intrigue, and she was executed. But of course Elizabeth would die without issue, and the now-grown King James VI of Scotland would end up inheriting the English throne as James I of England, leading to a personal union of the two crowns. Any questions?

And that’s just a simplified version of the Scottish-French angle (admittedly leaving out most of the Scottish and French details) for only the first half of Elizabeth’s reign, with only the most proximate causes mentioned and all the juicy bits about murdered husbands and Virgin Queens left out. We should probably include the Cecils and the Dudleys, and we might as well talk about English relations with Ireland and Spain while we’re at it. Damn that web of history!

Fortunately there have been some very good books published on the subject – I’d recommend Paul Hammer’s Elizabeth’s Wars in particular. Such works made it relatively easy to create a reference timeline to track key events. Assuming you are driven to invest the effort needed to create such timelines, that is. Personally, I came quite late to the utility of timelines, since I was always underwhelmed with the boring two columns found in most books, and, frankly, I tended to think more in sweeping thematic arcs. (Probably the opposite of why many history buffs fall in love with the subject.) Perhaps as a result, one of the big lessons I drew from my graduate school experience was that thematic arguments about the Military Revolution and the like were worth little unless you knew the background narrative. Why such practices and technologies evolved the way they did might even have something to do with when, where and how specific countries fought. Such historical minutiae might, for example, explain why a country might make no “progress” in the military art for 50 years if it was, for example, fighting a particular kind of war (say a civil war) in a particular kind of theater. To mention just one specific example, recent research on early modern fortifications offers very local reasons for the uneven adoption of the trace italienne.

I only began creating linear chronologies when I started teaching full-time, but I’d like to think I’ve caught up and even made one or two improvements to the genre. But you can decide for yourself, if you want to compare the examples I post here (and in previous posts) with the historical timelines in Rosenberg & Grafton’s Cartographies of Time.

So here’s the “simple” version, though it could certainly be made simpler.

Here’s the more complicated version. As you can tell, it’s framed from the English perspective (in the large English column, domestic events to the left and foreign-influenced events), with an indication of when England was involved with various wars (the shaded semi-opaque red areas, with each country its own column), but it also tries to give a general sense of the other wars western Europe was engaged in (the narrow columns on the far left). 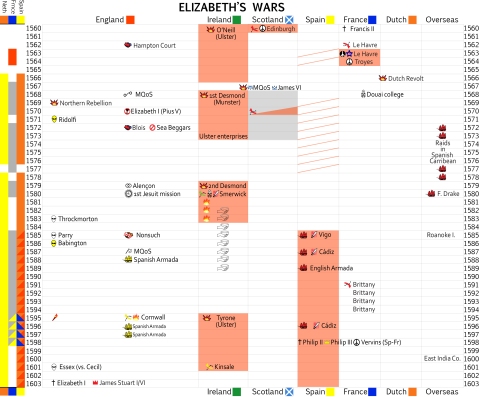 The above timelines are obviously at the highest, strategic, level. Which means they don’t include any operational details about the wars themselves, other than the occasional mention of a fortress surrendering. That would require a whole separate timechart, or else one in which you drill down or click on links.

My timeline philosophy, then, emphasizes:

One response to “Elizabeth’s wars”