When it rains, it pours

Early modern European military history (EMEMH) is a small field. Or so I thought, until I started to dust off my old grad school projects (late 1990s) on the French side of the Louis XIV’s last war. Then I discover, as I’ve already detailed, that there are quite a few French scholars now interested in the subject.

So it’s only fitting that, as I draft the final few pages of my book chapter on siege capitulations (only 18 years in the making!), I discover yet another scholar (not-French) interested in this particular subject:
Swart, Erik. “Defeat, Honour and the News: The Case of the Fall of Breda (1625) and the Dutch Republic.” European History Quarterly 46, no. 1 (January 2016): 6–26.

Abstract:
The honour of the polity, closely tied to military success, was of great importance in seventeenth-century European international relations. This article provides an analysis of the importance of the honour of the polity in the early Dutch Republic – the late sixteenth and first half of the seventeenth-century – and the role of military success and failure as crucial matters in this. It also contributes to the debate about the position of the Republic, now no longer seen as an anomaly, in European relations. In existing research scant attention is paid to the role of military glory in this. A military defeat, the loss of Breda in 1625, functions as an analytical tool. Analysing the manner in which this defeat was dealt with enables an assessment of the importance of the Republic’s honour in a ‘national’ and international context.
Huhn. Sieges and honor. I guess it’s a growth industry.
Which leads to a minor dilemma. Since my current chapter is almost finished, and I’ve been working on it forever, I’m taking the (unusual?) tack of intentionally and stubbornly ignoring the content of these other works at this stage. I’ve adopted this approach for two reasons. First, my own chapter is very focused in time, space and subject: how honor and shame was distributed in sieges (primarily Flanders) during the War of the Spanish Succession. More importantly, I’ve got too much to do as it is: too many primary sources I still need to skim through (and the chapter is already overdue), I just this week figured out the organization for this convoluted chapter, and, wouldn’t you know it, Spring semester starts next week. In other words, not enough time (over a short winter break) to read through a 650-page French dissertation, a few book chapters, and now a brand new journal article, then think about how they all relate to my own thesis, potentially refine/reformulate my own research, then do some additional research in my sources based off of my new thoughts, and then draft it all up – conceivably even requiring a reorganization of my chapter. Ain’t Nobody Got Time for That!
I am, however, mentioning their works in a footnote, with the tried-and-true “too late to be incorporated into this work.”  I feel a slight bit sheepish doing this, but at least it’s intellectually honest. And in an odd way I wonder if it’s a courtesy to these other scholars? Obviously in the case of dissertations, it doesn’t steal the thunder of other scholars – and, on the other side of the coin, I can also (truthfully) claim that I came up with the ideas all by myself. [It certainly wouldn’t be the first time such convergent scholarship evolved. Compare, for example, Michèle Virol’s “Le siège de Namur de 1692: l’héroïsme et la technique,” Dix-septième siècle 228, no. 3 (September 1, 2005): 465–88 with my diss/Vauban under Siege.] And I’d feel bad if I disagreed with their work and felt compelled to attack their work. I think there’s some kind of honeymoon period or something…
All this uncertainty, not surprisingly, circles back to that whole question about how to characterize a historiography that’s in flux that I’ve discussed before.
So when do you stop incorporating new works into your own, and why? When reading other scholars’ works, how up-to-date do you expect their historiography to be?
January 8, 2016

And I still haven’t found, what I’m looking for…

Photo of my “drafting space” for this interminable siege capitulation chapter. I mean, I thought my analysis of how garrison capitulations were interpreted was complicated, but sheesh. That’s what I get for trying to be systematic about 49 different sieges (125 if I were greedy), with a few dozen sources on each. 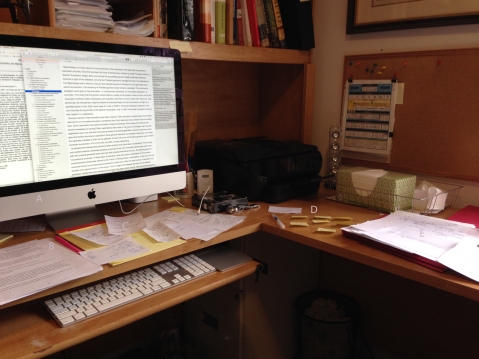 The Ugly Side of Historical Research

Key:
A. iMac with Scrivener for composing (I’m ambivalent about Scrivener’s sidebar chunks – they get out of control too quickly); Zotero for bibliographing; and Devonthink for the database (sources primary & secondary, searching, metadata, research journal…).
B. Printed (very, very, very) rough draft of chapter sections, with edits.
C. Scraps of paper, one sub-argument (with multiple subpoints) per quarter-sheet. Incorporate into the draft and into the recycling basket you go.
D. Tiny post-it notes with single facts/documents/thoughts/prose to include somewhere. (All the quotes, notes and source summaries are kept in DTPO.)
E. File folders with larger miscellaneous notes on the project. Usually stored long-term in case I ever go back to the topic.

The laptop is usually on the right when I need additional screenspace.
And of course hard copy books occasionally make a cameo as well. Still considering buying a book holder, unless Wayne is going to build a book wheel for me.

I’m usually still thinking through various bits at the drafting stage (“start writing before you think you’re ready to write – or at least by the time it’s already overdue”), so I:

Still working on a better system: I compose drafts on the computer, but am still old-school enough that I “think” better on paper. There is no substitute for the portability, persistence and spreadability of paper. Just make sure they’re centralized, and ephemeral as well.

Can you tell I’m teaching a research seminar and Historical Research and Writing in a few weeks?

What rhymes with Ottawa?

Preliminary program for the SMH 2016 conference in Ottawa is up here.

There aren’t that many EMEMH panels, but there’s at least one of note. There are also, as usual, several panels on 17C-18C America, a few on Native Americans and other indigenes, a sprinkling of Ancients, and a few on environment/topography. None on medieval or Napoleonic this year – I’ll assume the SMH often competes with the Woodstock party that is Kalamazoo.

So I’m thinking we should try to organize some informal EMEMH get-together sometime during the conference. Could be drinks, lunch or even dinner. Let us know in the comments if anyone is game, and we can try to figure something out.