In the last chapter of my Vauban under Siege book, “Towards a Vigorous Future,” I speculated that even though the French engineer Vauban had systematized the efficient siege attack c. 1700, future generations of commanders would ignore this efficient approach as readily as did commanders in the “age of Vauban.” Fortuitous, then, to find a British staff officer’s description of the siege of San Sebastian in the Peninsula illustrating the British tradition of ignoring siegecraft and relying instead on vigor, regardless of the human costs.

From The Letters and Journals of Sir Maynard Gomm, p. 310:

“We attacked the town yesterday morning, and failed. I do not think we have been engaged in so hazardous an attempt since this country became the scene of our adventures, not even at Badajos. I shall not persecute you with the details of this madcap enterprise, but will enclose another scratch for General Benson, which I will beg of you to send him when you have an opportunity. To him, I know, every little detail of this kind will be interesting, although I have my fears that he, with all the assistance of military knowledge, will hardly be able to decipher it. I do not know whether I have ever expressed it to you, but I have always had a dread of being engaged in any of these sieges. We are used to set so much to the hazard, and to dispense with the common precautions which theory would make us believe are necessary to be taken where success is in any degree to be ensured, and which our own repeated experience confirms. Not that in all situations the surest plan of proceeding is the best. Had we, for instance, attended to all the niceties of the art in the attack of Ciudad Rodrigo, or of Badajos, it is possible we should have taken neither. The French armies were collecting for the relief of both, and although they might not have beaten us, they would at least have commanded our attention. I am afraid the success on these occasions, owing to the almost miraculous efforts of our troops, has checked the progress of science among our engineers, and perhaps done more; for it seems to have inspired them with a contempt for as much of it as they had attained. Our soldiers have on all occasions stood fire so well that our artillery have become as summary in their proceedings as our engineers; and, provided they can make a hole in the wall by which we can claw up, they care not about destroying its defences, or facilitating in any degree what is, under the most favourable auspices, the most desperate of all military enterprises. In fact, we have been so called upon hitherto to ensure the success of our sieges by the sacrifice of lives, that our chief engineers and commandants of artillery remind us of what Burke says of the Revolutionary philosophers: The mathematicians, from the dry bones of their diagrams, and the chymists, from the soot of their furnaces, bring with them dispositions which make them more than indifferent to the cause of humanity. They seem to consider men as no more than mice in an air-pump, and calculate upon the expense we shall incur in carrying such and such a post with as much sangfroid as they do upon the supply of ammunition necessary to bring down the wall. We certainly came before this place, supplied, I thought, with all the means necessary for attacking it en règle, and I saw no reason for attacking it otherwise. We have, however, conformed in this instance also to what men of science call the new system, but what plain men call an abuse of the old one.

I have dwelt much longer than I ought to have done upon this subject; but it is at least pardonable in us, who are nearest concerned, to become tedious in passing our censure upon the method of proceeding of those whom we cannot but look upon as the authors of our calamity, which, as it might have been foreseen by them, and was by others, might have been avoided. In a very few minutes five hundred of the flower of the army were cut down: the Royal, which was the pride of the division, the 38th, an excellent corps. The 9th, fortunately, had not time to suffer much; but they lost nearly as many heads as they showed.

Most fortunately the troops behaved as they have always done. Sir Thomas Graham bore testimony to it, and I believe Lord Wellington, who was in the neighbourhood in the course of the afternoon, never expressed a doubt of it. He has too often seen them do what men can do to suppose for a moment that they were wanting in this instance. I do not know what is intended to be done; if we have a sufficiency of military stores remaining, and choose to treat the place with the respect it deserves, we shall certainly take it; if not, I suppose we shall blockade.”

That the sieges in the Peninsular war were desperate and often ill-managed affairs, and that the British engineering corps was subpar, is no surprise. More interesting to me is the fact that many of the dynamics I detailed in my discussion of the War of the Spanish Succession are present here as well: the pressures to accelerate an attack; the difficulties determining whether to attack a specific town with an accelerated or regular attack; the divisions within the engineering corps as to whether an attack dans les formes is even necessary; as well as the way in which previous vigorous successes lulled commanders into believing that patient siegecraft would never be needed. Plus ça change…

Extra! Extra! Read all about it!

You’ll never know until you ask.

I was going through my DTPO database (loving the Keyboard Maestro macros, BTW), and I came across mention of an intriguing reference in a London Gazette newspaper from 1693. As is too often the case, the secondary source I took the note from failed to quote from the issue in question, making it critical for me to see the original. And while I do have 1,400 issues from the London Gazette, those only cover the years 1701-1712.

Without access to the online Burney newspaper collection, I attempted a Hail Mary and checked Google. Lo and behold, the company responsible for the London Gazette, sometimes known as the British government, is still around, and has actually gone to the expense (err, expence) of providing a screen to search back issues.

What the hell – I thought – I’ll just type in 1693 for the year and see what happens. It’s not like they can take away my Historian’s license if their archives only go back to 1815. And to my utter amazement, this popped up: 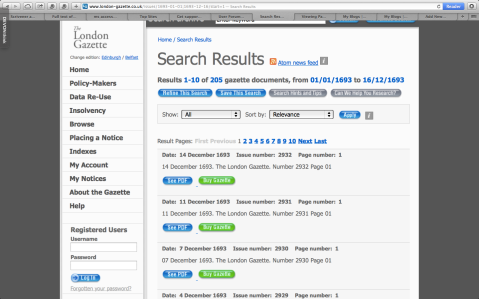 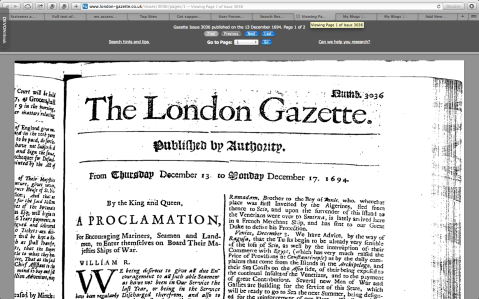 Then this – London Gazette view

It’s a thing of beauty I tells ya.

So download ’em while ya got ’em. (If you have a macro app, you could probably even make a macro to navigate through the pages and either download or take screen shots of each.)

One warning though: the search apparently doesn’t realize that the official government calendar back then started the year on March 25 (Lady Day, the day of Jesus’ supposed conception). Regular readers know what I’m talking about. So, for example, I’m looking at an issue dated “Thursday 15 February to Monday 19 February 1704”, which mentions how the garrison of Verrua was still defending itself. The problem, of course, is that the mountaintop fortress of Verrua wasn’t invested until mid-October 1704, and it defended itself into early April of 1705. Or you could check a dozen other factual references in each issue and discover the same. You might even be able to tell those first three months are out-of-order from the issue numbers printed on the first pages – but there are sometimes typos in those. ;(

It must have been confusing for contemporaries as well, given the frequency with which we can find handwritten notations such as the following:

The SMH released its program for the upcoming annual conference in April. Several panels of note to EMEMHians:

I won’t be attending, so somebody needs to take good notes for me.

Long-time readers may have blocked out the memory, but when this blog first started, I was feeling my way as a blogger and trying out a variety of different types of posts. One genre was the venerable Caturday meme. And guess what – it’s back! Thanks to a recent story in the Daily Mail about 16C rocket cats. Yes, you’ve probably heard of WW2-era bat bombs, and now we have German rocket cats (and birds). 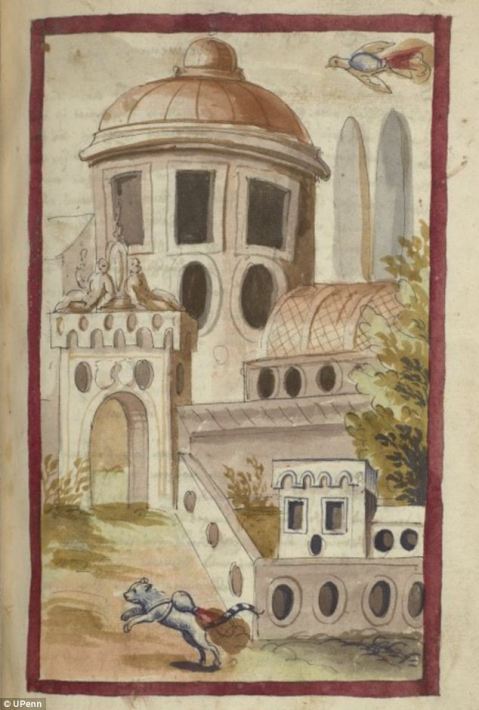 16C German rocket cat (and bird) attacking a city, c. 1530 – not that you could tell from the fortifications.

And here I wasted 380 pages talking about cannons and trenches and mines. (Admittedly, I did mention stratagems, so I get partial credit.) How could I have missed the obvious, revolutionary impact of animal explosives? Now there’s your Military Revolution!

On a serious note though, is this more than just another example of some crank repeating a crazy idea here? For example, do we see more cases of such fanciful deus ex machina proposals when the trace italienne is still dominant? Is this an example of a more general tendency for people to fall back on wishful thinking when they face a difficult challenge?