In less than a month we’ll be heading to Vienna and Munich (oops, Wien and München) for a couple of weeks. Spanish dancing horses and a few palaces/museums are on our list, but feel free to leave suggestions in the comments about places of particular interest for early modern military history. Intact star fortresses are particularly appreciated (I’ve got a video to record). And no, we won’t be venturing out to Blindheim. 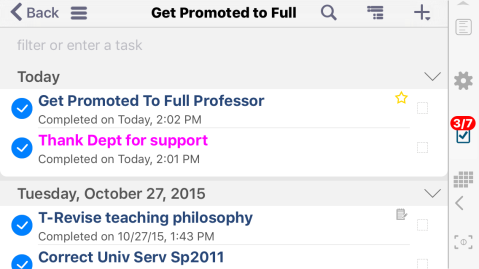 And for those who need statistics from my first full academic year of real GTD use:
Total tasks completed (i.e. those that I bothered to enter into Pocket Informant and not just do right away) from 2015.08.22 to 2016.05.11:
1200 tasks (probably 3-5 hours-worth of entry time over the span of 8 months).

And to see how much I used the various pieces of metadata, and to get a better sense of what I did with my time, in broad brushstrokes, I record the following summaries for posterity: 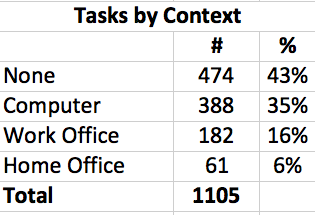 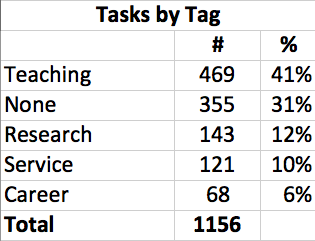 I wouldn’t analyze these too closely, since some tasks were deleted, since not every task had every possible piece of metadata – some of them were just ephemeral reminders to myself (“Bring cheese”) set up with Siri, and since different tasks required differing amounts of time to complete. But still, it’s kinda interesting, if you’re into that kind of thing…

And speaking of generic end-of-academic-year checklists:

Ha! Thought I’d let a GTD post go by without a checklist? You’ve been chklstd!

For those familiar with the early Reformation, you might recall one of Martin Luther’s classic criticisms of the Catholic Church, from his Address to the Christian Nobility of the German Nation Respecting the Reformation of the Christian Estate (1520): “The Romanists have, with great adroitness, drawn three walls round themselves, with which they have hitherto protected themselves, so that no one could reform them, whereby all Christendom has fallen terribly.” I’ll spare you a description of the Catholic fortifications, and of the tactics Luther used to besiege this fortified opponent. But I won’t spare you my maladroit use of this metaphor to introduce my own version of the four walls that separate early modern European military historians from each other. There are, I would argue, four significant obstacles that tend to isolate EMEMHians, and which make it treacherous for us to overgeneralize beyond our particular area of focus. Like a trace italienne fortification, knowledge of EMEMH is protected by four defensive layers. Gaining access to the secrets within requires besieging and breaking past these formidable barriers.

The First Wall: A Focus on a Particular Country
Even today, early modern European military historians still tend to focus on a single country, mostly either France or England. Gaining knowledge of the field of EMEMH requires you first penetrate this veritable covered way. Mutual understanding between EMEMHians is hindered first and foremost by a language barrier, which requires charging up the glacis and breaking through the linguistic palisades. Having successfully prepared an assault on the covered way with an initial bombardment of foreign language classes and paleography lessons, an invader from another country then finds himself confronted with the defenders therein, hundreds of culturally-specific events, individuals, and structures, all armed with their own histories and patterns that require a concerted effort to wrestle into comprehension. Each new allusion and curious reference in your sources is yet another traverse that needs to be passed and secured on your way to understanding a country’s military history.

The Second Wall: A Focus on a Particular War
Capturing the widely-arcing covered way around a fortress only provides you a hazy overview of the fortifications still to penetrate. The chronological boundaries between one war and the next serve as yet another obstacle, a moat or ditch, if you will. Inconveniently for historians like myself, Louis XIV fought five majors wars, about 34 years worth, each with enough information for a scholarly career. Thus we find most specialists of the era from c. 1660-c. 1715 devoting their attention to one of these wars, or perhaps specializing in either the early, middle, or late reign. To cross this yawning chasm requires a facility with an overview of each war as a whole: its diplomatic and political origins, the grand strategic objectives of the belligerents, its overall narrative, and its resolution. Usually the ditch is wet, and filled with flotsam and jetsam from previous wars. Yet more obstacles to drain away and build your fascine bridge-of-understanding on top of.

The Third Wall: A Focus on a Particular Theater of Operations
The multiple theaters in which military operations were conducted are a third type of boundary the generalizing EMEMHian must overcome. At the time most theater boundaries were easily crossed, but for historians these different theaters are individual ravelins within the outworks, each one requiring its own conquest. A country (or its most successful commander) might concentrate their attention in one specific geographical outwork, a massive crownwork to be occupied. The ditches between such theatrical outworks are further policed by the structure of many archives, where Flanders documents are physically separated from those on Italy, and so on. Thus the larger wars, e.g. the 9YW and WSS, witnessed sustained operations in four major European theaters, sub-theaters within each. Each had a unique combinations of nationalities; their operational constraints (divergent topography, climate, demographies, and economic and transportation networks) operated as yet another réduit to overcome. No surprise that the operational arcs of different theaters were often, well, different.

The Fourth Wall: A Focus on a Particular Level of War
Most works on EMEMH are also isolated from a broader readership by their focus on a particular topic. When scholars have managed to overcome the first three barriers to greater early modern understanding (the chronological impediment more easily breached than the national), they are still confronted by numerous studies that focus on one particular aspect of the war. Thus we have works on battles, on infantry tactics and drill, on cavalry, on sieges, on artillery, on small war, on logistics, on financial administration, on army administration, on the political assimilation of frontier provinces, on military-civilian interactions, and so on. Most of the detailed research on these subjects has only appeared over the past decade or two, and rarely are all the topical components integrated into any one of them, and even less likely for more than one country.

These four walls resist historical attempts to truly understand a single war, much less the military history of a single country. These specializations – national, chronological, geographical and topical – are necessary, but so is our need to break them down. The shortcomings of most attempts to study war X from the perspective of country Y (which is, most often, actually a study of the single theater Z) can be illustrated by the average Confederate (i.e. Allied) army during the 9YW and WSS. In Flanders, this average army would comprise units from the United Provinces, Britain (England and Scotland), Spain, Germany, and Bavaria. In the WSS we can occasionally add Imperial and Austrian troops, while subtracting the Spanish and Bavarians. Some of these units, and their commanders, would shift from one theater to another, just as defenders might readjust their personnel from one outwork to another during a siege. To get the full picture of who these Allied troops were and what they did requires plowing through archives (and god-awful handwriting) in multiple countries, in English, French, Dutch, Spanish and German tongues. And we’d have to repeat the same siege operations in order to delve into the operations of another theater, and then again for another war.

Acknowledging these walls is not necessarily a criticism of the work many EMEMHians (including myself) have undertaken. It is, however, a warning about how far we should generalize from our particular particulars. Perhaps it’s even a call to action. Integrating together countries and themes and wars remains, I would suggest, the next challenge for early modern European military historians.

So if you wondered what our SMH panel on Anglo-Germanic relations was like (without the strained fortress metaphor), you just got a peek. And yes, I did complete my post-conference checklist.